“To build self-confidence, to nurture creative thinking, and to promote leadership through respect, service and unique governing opportunities.” 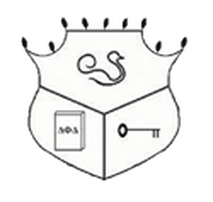 Delta Phi Delta has an exceptionally interesting history in the college.  The first known record of them is from the Royal Purple in 1934.  The Delphis were formed when they broke off from Kappa Delta Chi.  They disbanded in 1964 only to return in 1986 and celebrated their twentieth anniversary in 2006.

The founding members chose the nine muses of Greek mythology to name the families of Delta Phi Delta. Each founding member took the muse that best suited her personality. They also chose 3 colors (red, purple, and silver) and 2 animals (the swan and the dolphin) to represent the group and its meaning. Red is a tribute to the history of our group, the Cardinals, whose colors were crimson and white. Purple is the color of royalty, and as such is associated with learned leaders. Gray is for the dolphins, the most intelligent animal.  The swan represents inner grace, beauty, self-confidence, and strength. The Delphi mascot is the dolphin, not only for its intelligence, but because it is the known messenger to the gods. Delphi means dolphin in Greek.

Delphis participate in quite a few service projects including Relay For Life (cancer fundraising event), the Angel Tree project, and Crop the Walk. Actives also frequently volunteer for Service Saturdays and at the Cedar Valley Humane Society. Many actives also choose to knit and crochet for Warm Up America! foundation.
Powered by